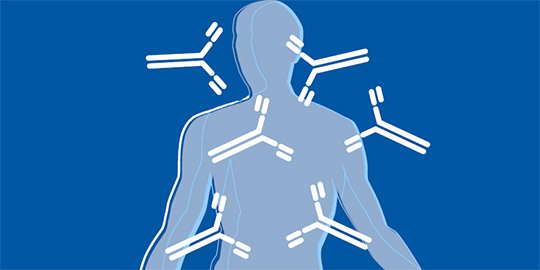 An autoimmune disease is a malfunction of the immune system. The system attacks the body's own tissue or cells and can no longer distinguish between "endogenous" and "exogenous" cells.

Pathogens adapt to the host organism in order to be more difficult to recognize as "foreign" (molecular mimicry).

Autoreactive immune cells are activated, which fight the pathogen acutely, but also form memory cells that can trigger autoimmune diseases even years later.

Around 60 autoimmune diseases are currently known. These can either manifest themselves systemically in the entire body (e.g. joints, connective tissue, etc.), be limited to certain organs or also occur together (intermediate).

The level of the antibody titer is decisive for the diagnosis of an autoimmune disease. Most autoantibodies are physiological (e.g.: dsDNA, ANA). The sole determination of the autoantibodies for a diagnosis is not sufficient, other serological findings as well as the clinical condition of the patient should be considered.

An autoantibody is determined in a special laboratory using ELISA, immunofluorescence or Line Immuno Assays (LIA).

Depending on the manifestation, a distinction is made between...